Based in Fort Worth, Texas, the JSF F-35 program provides several important lessons about financial management: 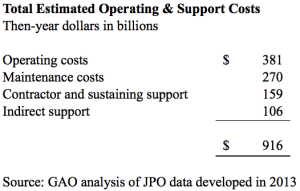 The November/December 2015 issue of the Journal of Corporate Accounting & Finance breaks down these lessons and sheds light on the world’s largest project to date, the trillion dollar to develop the F-35 Lightning II family of single-seat, single-engine, multirole fighter aircraft.

Here’s a closer look at the third lesson: Don’t set arbitrary targets and then manage to them

Deming based this point on the idea that it is useless to specify a goal without developing a method for achieving it. The U.S. Government Accountability Office has been critical of Department of Defense (DOD) affordability efforts:

When the DOD established affordability targets for the F-35 program in 2012, the methodology…was not informed by actual resource constraints….Specifically, DOD officials stated that targets were determined by arbitrarily lowering…estimated F-35 Cost per Flight Hour by 10 percent….

The JSF F-35 program is massive—unprecedented in size. It has scored many successes.

Along the way, it has offered many lessons for us to consider.  You can read about them in the Journal of Corporate Accounting & Finance, 2015 (November/December) and also here.